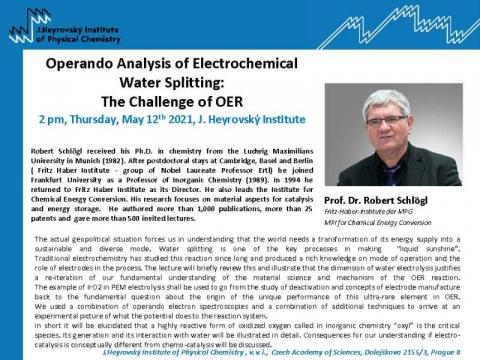 Operando Analysis of Electrochemical Water Splitting: The Challenge of OER

Robert Schlögl received his Ph.D. in chemistry from the Ludwig Maximilians University in Munich (1982). After postdoctoral stays at Cambridge, Basel and Berlin ( Fritz Haber Institute - group of Nobel Laureate Professor Ertl) he joined Frankfurt University as a Professor of Inorganic Chemistry (1989). In 1994 he returned to Fritz Haber Institute as its Director. He also leads the Institute for Chemical Energy Conversion. His research focuses on material aspects for catalysis and energy storage.  He authored more than 1,000 publications, more than 25 patents and gave more than 500 invited lectures.

The actual geopolitical situation forces us in understanding that the world needs a transformation of its energy supply into a sustainable and diverse mode. Water splitting is one of the key processes in making  “liquid sunshine”. Traditional electrochemistry has studied this reaction since long and produced a rich knowledge on mode of operation and the role of electrodes in the process. The lecture will briefly review this and illustrate that the dimension of water electrolysis justifies a re-iteration of our fundamental understanding of the material science and mechanism of the OER reaction. The example of IrO2 in PEM electrolysis shall be used to go from the study of deactivation and concepts of electrode manufacture back to the fundamental question about the origin of the unique performance of this ultra-rare element in OER. We used a combination of operando electron spectroscopies and a combination of additional techniques to arrive at an experimental picture of what the potential does to the reaction system.

In short, it will be elucidated that a highly reactive form of oxidized oxygen called in inorganic chemistry “oxyl” is the critical species. Its generation and its interaction with water will be illustrated in detail. Consequences for our understanding if electro-catalysis is conceptually different from chemo-catalysis will be discussed.