Brief History of the Institute 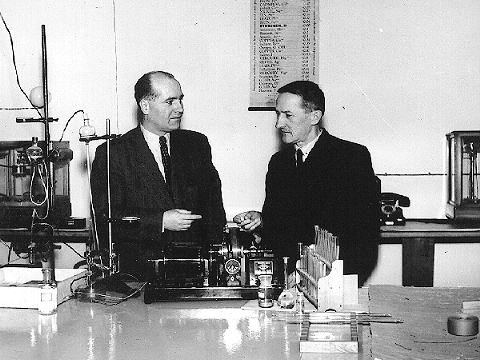 The Institute of Polarography was founded in 1950 under the directorship of Professor Jaroslav Heyrovský, and two years later became a part of the newly constituted Czechoslovak Academy of Sciences. Research activities focused both on the theory of polarography and physico-chemical processes occurring at the dropping and streaming mercury electrodes, as well as on the methodology, instrumentation and analytical applications of polarography. The award of the 1959 Nobel Prize for Chemistry to Professor Heyrovský for the invention and development of polarography represented an important stimulus for the Institute and encouragement for the whole scientific community in the country. The early sixties marked the start of a gradual extension of pursued research topics from polarography to other disciplines of general and applied electrochemistry, including different methods of electroanalysis, electrochemical power sources, and electrochemical processes at interfaces between immiscible electrolyte solutions with relevance to biological membranes. When Professor Heyrovský retired, his former student Antonín A. Vlček, who was engaged in electrochemical studies of inorganic coordination compounds, took over the position of director of the Institute in 1965.

The Institute of Physical Chemistry, with Professor Rudolf Brdička as director was established in 1955 by expanding the Laboratory of Physical Chemistry founded in 1953 within the framework of the forming Czechoslovak Academy of Sciences. As most of the first members of the Laboratory and of the Institute were awarded their degrees for research work in polarography, this field was in the forefront of their research interest for some time, with a focus on the exact solution of mass transport to the dropping mercury electrode combined with chemical volume reactions accompanying the electron transfer process. However, the research program of the Institute gradually expanded to other disciplines such as mass spectrometry, dynamics of elementary collisions of ions and excited atoms with molecules, theory of the chemical bond, quantum chemistry, adsorption and heterogeneous catalysis, polymer science and organometallic chemistry, aerosol science, thermodynamics and kinetics of chemical reactions, molecular spectroscopy, and electron spectroscopy. A difficult situation occurred after the Warsaw Pact invasion of Czechoslovakia in 1968, when many members of the Institute including several leading personalities emigrated to the West. After a transition period following the untimely death of Professor Brdička in 1970, the Institute of Physical Chemistry was in 1972 amalgamated with the Institute of Polarography under the name J. Heyrovský Institute of Physical Chemistry and Electrochemistry, with Professor A. A. Vlček as director. In 1988 the Institute moved to a new building constructed on the Academy Campus in Prague 8. This event represented a radical improvement of working conditions and was crucial for the further development of the Institute.

The political changes in the country after the year 1989 started a new era of the Academy. The Institute gained a large measure of autonomy and its structure and management were extensively reformed. In 1990 the Scientific Council of the Institute elected Rudolf Zahradník, a theoretical and quantum chemist, as the director. In order to overcome the consequences of central planning in scientific work and to increase the efficiency of the Institute, its staff was reduced almost by half, and research in some fields was even terminated. Grant system of funding research projects was introduced. Abolition of restrictions imposed on contacts with the scientific community abroad opened the way to wide international cooperation and integration of the Institute into a number of research networks. Also a rapid and extensive modernization and improvement of the experimental equipment and computer facilities started. Due to his election as President of the Academy of Sciences of the Czech Republic in 1993, Rudolf Zahradník resigned from the position of director of the Institute and Vladimír Mareček, an electrochemist, was elected his successor for a 4-year term. The name of the Institute was shortened to J. Heyrovský Institute of Physical Chemistry. In 1997, Vladimír Mareček was re-elected as the director of the Institute for the next term. When he stepped down from this position on December 31, 2000 due to personal reasons, Petr Čársky, a quantum and theoretical chemist, was elected to director for the next four years (2001-2004), and re-elected in 2004 for the period 2005-2008.

Since 2007 the status of the Institute was changed to the "public research institution (v.v.i.)" due to new legislation, and management structure was changed accordingly. Regulations were introduced restricting directorships to a maximum of two five-year terms. The established Board of the Institution elected Zdenĕk Samec, an electrochemist, as director for the period 2007-2012, and re-elected him in 2012 for the next five years (2012-2017). In 2017, Martin Hof, a biophysical chemist, was elected to director for the period 2017-2022. A general research plan was adopted with a focus on

To comply with this plan, the structure of the Institute was rearranged and the number of departments was increased to twelve.