The beauty of physical equations: Prague is the third european city to paint an equation in a public place

The Heyrovsky-Ilkovich equation was painted on the side wall of the J. Heyrovsky Institute of Physical Chemistry in June. The Institute of the Czech Academy of Sciences has thus joined the Dutch cities of Leiden and Utrecht, where the idea of promoting science by means of equations on public buildings originated. Another equation will be painted in Vienna. This science communication activity is part of the ONEM project.

In mid-June, residents of the housing estate near the Ládví metro station were stopping by the building on the premises of the Czech Academy of Sciences and taking pictures of it. Over the weekend, a large sign with the Heyrovsky-Ilkovich equation appeared on the side wall of the J. Heyrovsky Institute of Physical Chemistry.

As part of the ONEM (Optical Near-Filed Electron Microscopy) project, the J. Heyrovský Institute of Physical Chemistry joined the Dutch cities of Leiden, where eight equations already adorn the walls; and Utrecht. The aim of this project is to show the public the beauty of mathematical equations of physical and chemical phenomena, to commemorate important scientific discoveries as well as  personality figures who worked in the city and discovered them.

The Heyrovsky-Ilkovich equation describes the polarographic wave. Polarography was discovered 100 years ago, in 1922 by Jaroslav Heyrovsky, who won the Nobel Prize for this work in 1959. The polarography method is used to determine the presence and concentration of unknown substances within a solution. It has been widely used in industry to determine the composition of raw materials and products; has been exploited in the field of medicine for the analysis of blood; and in the food industry to determine the concentration of ingredients within food stuffs.

"The Heyrovsky-Ilkovich equation describes the basic relationship between the electric current flowing through a mercury drop electrode and the potential," explains Zdeněk Samec, who selected the equation for the wall of the Institute. In 1934, this equation was derived by Dionýz Ilkovič, a student of Professor Heyrovský.

The J. Heyrovsky Institute of Physical Chemistry carries the legacy of our first Nobel Prize winner in the Czech Republic, for Chemistry. When we joined the ONEM project (thanks to the initiative of Mariana Amaro) we also welcomed the promotion and honouring of scientific discoveries on the walls of our institute. As a result, Prague has become the third European city where a significant scientific discovery is commemorated in a public place in the form of a mural. This project has received funding from the European Union’s Horizon 2020 research and innovation programme under grant agreement No. 101017902.

"It is really exciting to see the wall formulas project come to life and literally bring scientific breakthroughs to the streets of Prague. This is one of the most creative science communication projects I have ever been involved in and in only a few days it has already engaged the curiosity of many people. It is very fulfilling to see that the murals spark thoughts and conversations about science and that they allow the wider community to be able to connect with science." says Mariana Amaro. 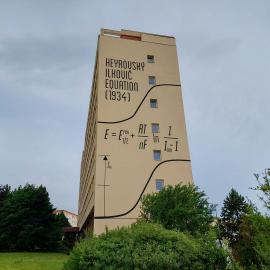