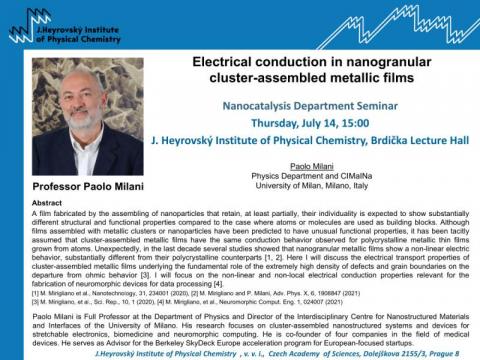 A film fabricated by the assembling of nanoparticles that retain, at least partially, their individuality is expected to show substantially different structural and functional properties compared to the case where atoms or molecules are used as building blocks. Although films assembled with metallic clusters or nanoparticles have been predicted to have unusual functional properties, it has been tacitly assumed that cluster-assembled metallic films have the same conduction behavior observed for polycrystalline metallic thin films grown from atoms. Unexpectedly, in the last decade several studies showed that nanogranular metallic films show a non-linear electric behavior, substantially different from their polycrystalline counterparts. Here I will discuss the electrical transport properties of cluster-assembled metallic films underlying the fundamental role of the extremely high density of defects and grain boundaries on the departure from ohmic behavior. I will focus on the non-linear and non-local electrical conduction properties relevant for the fabrication of neuromorphic devices for data processing.

Paolo Milani is Full Professor at the Department of Physics and Director of the Interdisciplinary Centre for Nanostructured Materials and Interfaces of the University of Milano. His research focuses on cluster-assembled nanostructured systems and devices for stretchable electronics, biomedicine and neuromorphic computing. He is co-founder of four companies in the field of medical devices. He serves as Advisor for the Berkeley SkyDeck Europe acceleration program for European-focused startups.